You must be a U.S. resident and at least 18 years old to participate in the Puritan's Perks Rewards Program.

Please click below to confirm you are eligible to participate. For more information, please review the program terms and conditions.

How are points calculated?

Puritan’s Perks members earn 10 points for every $1 spent. Points are earned at an item level, rounded to the closest whole number (if below .5 rounded down and if .5 or above rounded up) based on the cost after applying all eligible promotional coupons, Puritan’s Perks rewards (redeemed points), and before shipping and taxes.

You may also earn extra points during special bonus events. Points are awarded as your items ship. View the Puritan’s Perks program terms and conditions for more information.

Your exclusive Puritan's Perks offer
has been applied to your cart.
Start shopping to enjoy your savings!

Ubiquinol 200 mg offers our highest daily dose of Ubiquinol available. A daily dose of 400 mg Co Q-10 is ideal for individuals who occasionally experience headaches.** When taken regularly, Co Q-10 is a drug-free way to help occasional minor headaches due to temporary stress.** This dose may also be well-suited for men looking to support prostate health.** Two daily softgels supports healthy levels of enzymes that are important for prostate health.**

Those looking for less-specialized benefits can still get the cardiovascular and overall wellness benefits of a high quality Co Q-10 supplement with just one softgel per day.** A single softgel delivers the active form of Co Q-10 to start fighting free radicals in the body while also supporting healthy blood pressure levels already within a normal range.** If you are unsure which dose is right for you, we recommend consulting with your healthcare professional.

One Serving Per Day

You are probably familiar with coenzyme Q-10 (Co Q-10). But did you know that it exists in two forms?

Originally, Co Q-10 supplements were only available as Co Q-10 in its oxidized form, ubiquinone. Now the reduced form of Co Q-10, ubiquinol is also readily available in dietary supplements. Co Q-10 is recycled back and forth between these two forms depending on the demands of the body.

Supplementing with either ubiquinol or ubiquinone is effective at restoring low blood levels of Co Q-10 to the population average.2 However, ubiquinol may be a better choice for older adults, those with high Co Q-10 needs, or anyone wanting to quickly replenish their Co Q-10 levels.** Ubiquinol supplements have been shown to increase levels of Co Q-10 in the blood by 110% more when compared to regular Co Q-10 supplements.**

JUST THE FACTS ON UBIQUINOL

Ubiquinol levels in the body reach their peak by age 20 and decrease by up to 50% in different parts of the body by age 80.3

Statins can lead to a 51%
decrease in Ubiquinol plasma levels
within 30 days of use.++

The average dietary intake of Ubiquinol is only about 3-5 milligrams per day.3 Not nearly enough to replenish levels lost due to age-related decline or prescription drugs.

How much do I need?

Depending on your needs, Ubiquinol supplementation recommendations can range anywhere from 60-600 milligrams per day to increase tissue concentrations.

++ Ubiquinol is not intended to serve as a replacement for statin therapy, nor should you discontinue taking any prescribed medications while supplementing with Ubiquinol
Ubiquinol’s Role in Supporting Energy**

Ubiquinol acts as a key component in our mitochondrial machinery involved in making up a large percentage of the body’s energy.

This energy is produced via the electron transport chain in the form of ATP (adenosine triphosphate) across the inner mitochondrial membrane.1

Ubiquinol is vital for the muscle of the heart.2

The reason is due to the heart’s requirement of a constant supply of ATP energy. While blood vessels transport blood, the heart provides the force to pump blood around the body.

Ubiquinol supplements can help replenish what is lost with age or what statin medications deplete.

However, Ubiquinol is not intended to serve as a replacement for statin therapy, nor should you discontinue taking any prescribed medications while supplementing with Ubiquinol.

Ubiquinol supplementation recommendations can range anywhere from 60-600 milligrams per day.

As you get older opt for a higher dose Ubiquinol supplement, but don’t forget to choose a highly purified Ubiquinol like Q-Sorb™ Ubiquinol. 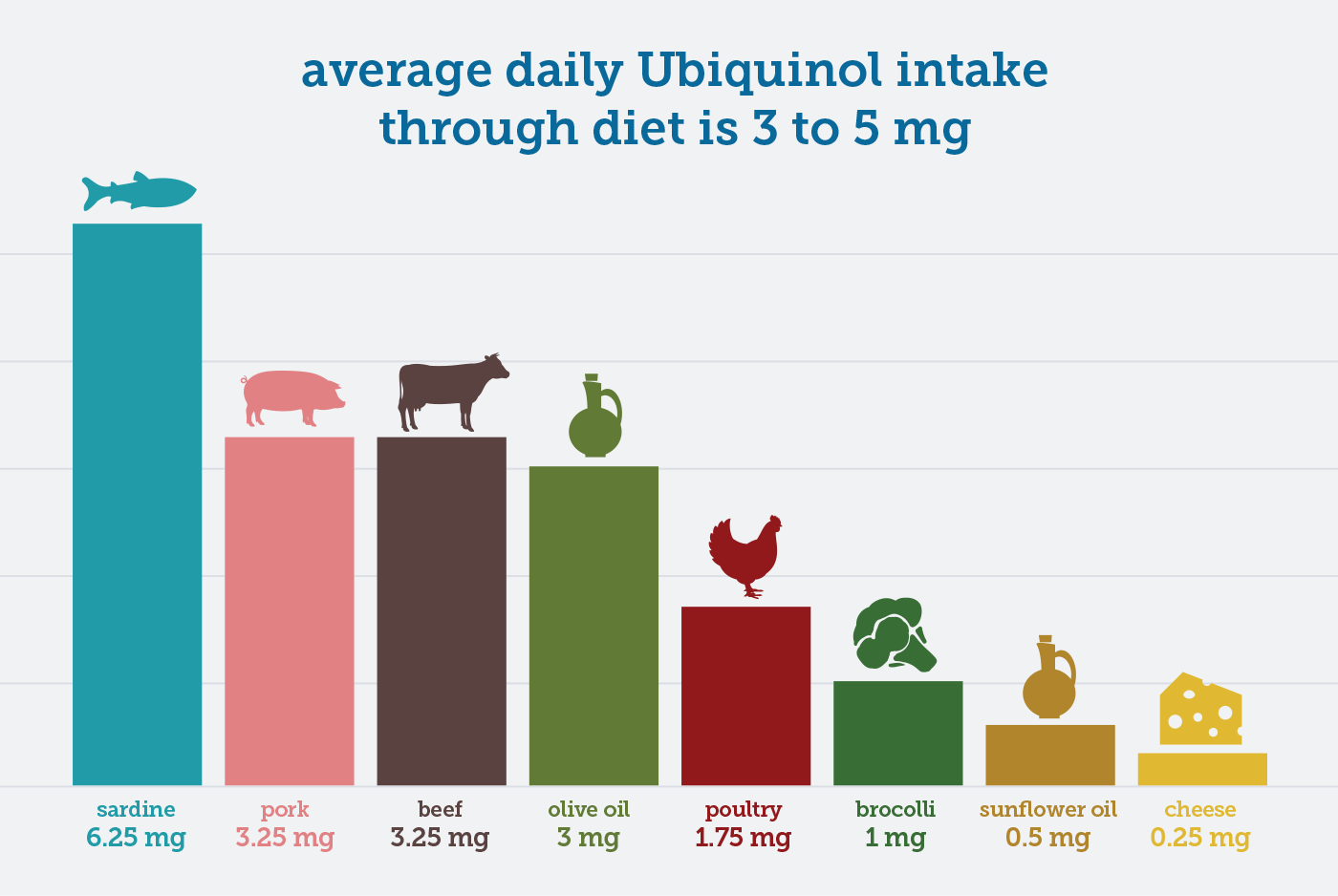 Why should I supplement with Ubiquinol?

As we get older, our natural Ubiquinol levels decline, especially in the heart, other organs and tissues with high-energy requirements, and in outer layers of the skin. A highly purified Ubiquinol supplement like Q-Sorb™ may assist in keeping these levels up, especially as we get older.**

Can I get Ubiquinol from my diet?

Although Ubiquinol can be found in foods like fish, pork, and beef, we may not obtain enough Ubiquinol in our daily diets, especially as cooking methods like frying reduces the natural Ubiquinol content in these foods. Following a plant-based diet may also mean lower Ubiquinol intake. By taking a Ubiquinol supplement, this gap in our diet may be filled.

How does Ubiquinol work?

Ubiquinol is needed for the production of ATP (adenosine triphosphate). ATP is the energy our body cells use to perform their daily activities optimally. Certain cells in the body are more metabolically active and have higher energy requirements. Ubiquinol levels are naturally higher in the heart and skeletal muscles for this reason.

I take a statin and my doctor recommended I take Ubiquinol, why?

Studies have found that statins deplete Ubiquinol levels in the body. A Ubiquinol supplement can help replenish what a statin medication might deplete. Please be aware that Ubiquinol is not intended as a replacement for statin therapy, nor should you discontinue any prescription medication while supplementing with Ubiquinol.

What is Q-Sorb™ Ubiquinol?

Puritan's Pride's own Q-Sorb™ Ubiquinol is a naturally fermented, highly purified form of Ubiquinol. We take the same form of Ubiquinol your body naturally produces and enrobe it in naturally sourced oils to improve absorption. Q-Sorb™ is available in rapid-release softgels in various dosages to suit your needs.

Myth: Ubiquinol is an energy stimulant or will give you the "jitters"

Although Ubiquinol helps the body produce energy, this energy production is at a cellular level so Ubiquinol will not give you the sudden energy boost you may get from consuming caffeine or a sugary snack.

Myth: I take a multivitamin and mineral every day, so I don’t need Ubiquinol

Most multivitamin and mineral supplements contain no or very low quantities of Ubiquinol. Additionally to support absorption, Ubiquinol is best taken in a softgel along with a meal. Ubiquinol supplementation may be especially important as we age as our Ubiquinol levels naturally decline as we get older.

Myth: Ubiquinol is easily absorbed in tablets or in powder form

Efficient absorption of any ingredient is dependent on a variety of factors, but with Ubiquinol, delivery form is of particular importance. Taking Ubiquinol in a softgel rather than in a powder form makes Ubiquinol more absorbable. By choosing a high purity Ubiquinol like Q-Sorb™ Ubiquinol, you know you’re getting not only quality you can trust, but also that your body is going to absorb it more efficiently too.

Myth: I can stop my cholesterol-lowering medication if I use Ubiquinol

No. Ubiquinol is not intended to serve as a replacement for statin medication, nor should you discontinue taking any prescribed medications while supplementing with Ubiquinol without consulting your doctor. 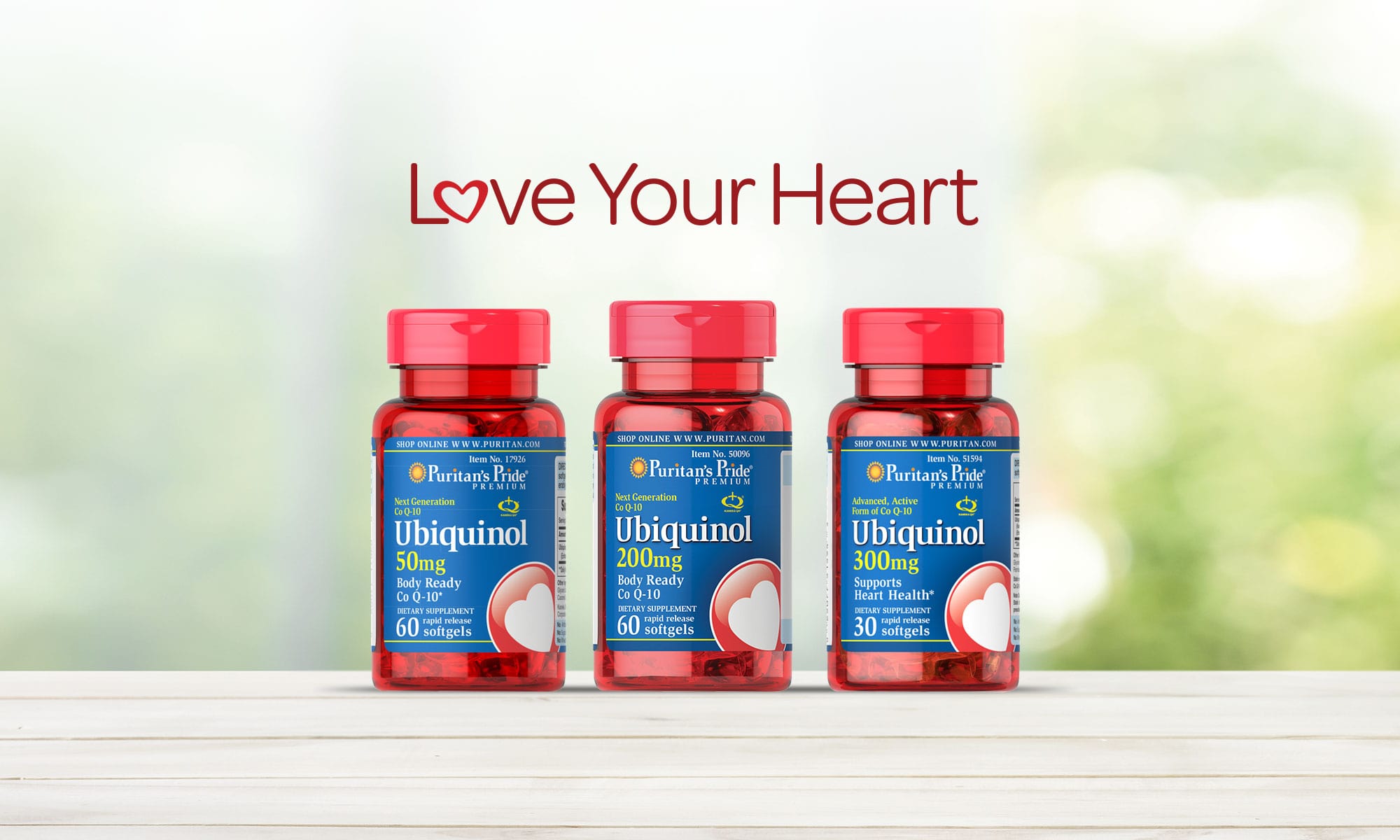 BUY NOW
Directions: For adults, take one (1) softgel one to two times daily, preferably with a meal.

WARNING: If you are pregnant, nursing, taking any medications or have any medical condition, consult your doctor before use. Discontinue use and consult your doctor if any adverse reactions occur. Keep out of reach of children. Store at room temperature. Do not use if seal under cap is broken or missing.

No Artificial Flavor or Sweetener, No Preservatives, No Sugar, No Starch, No Milk, No Lactose, No Gluten, No Wheat, No Yeast, No Fish. Sodium Free.

Getting the most out of life every day is what inspires us to deliver over 3,000 outstanding products that help you achieve your health and wellness goals.

We take pride in manufacturing the vitamins, minerals and herbal supplements that complement your healthy lifestyle, plus we offer essential oils, nutritious foods and more.

So get out there and embrace life… because the journey is your reward.

Trusted and Loved
by Generations of Families
for Over 45 Years